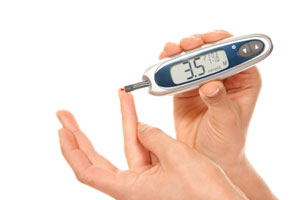 Diabetes can refer to two different scenarios. In one instance the body doesn't produce enough insulin, so the glucose cannot be properly absorbed by their cells. This condition is called Type 1 diabetes.

In the second scenario a person's body may be producing enough insulin, but for some reason their cells resist it, causing the glucose levels to build up in their blood. This is called Type 2 diabetes.

In cases of Type 1 diabetes, the symptoms develop quickly and are generally apparent by the time a diagnosis is made. Type 2 diabetes develops over time, and it could be years before the patient even knows they have it.

With any case of diabetes, there are symptoms that appear sooner, and some that develop over time. Some of the earlier symptoms include:

Some of the symptoms that appear over time include:

Unfortunately there is no cure for Type 1 diabetes, and patients will have to take insulin injections the rest of their life to regulate the sugar levels in their blood.

Type 2 diabetes can often be controlled with lifestyle changes. One of the most common causes of Type 2 diabetes is being overweight, because an excess of fat cells in the body makes it more difficult for the other cells to absorb insulin properly. In these cases your doctor may recommend a program that includes a combination of medication, dieting, and exercise.